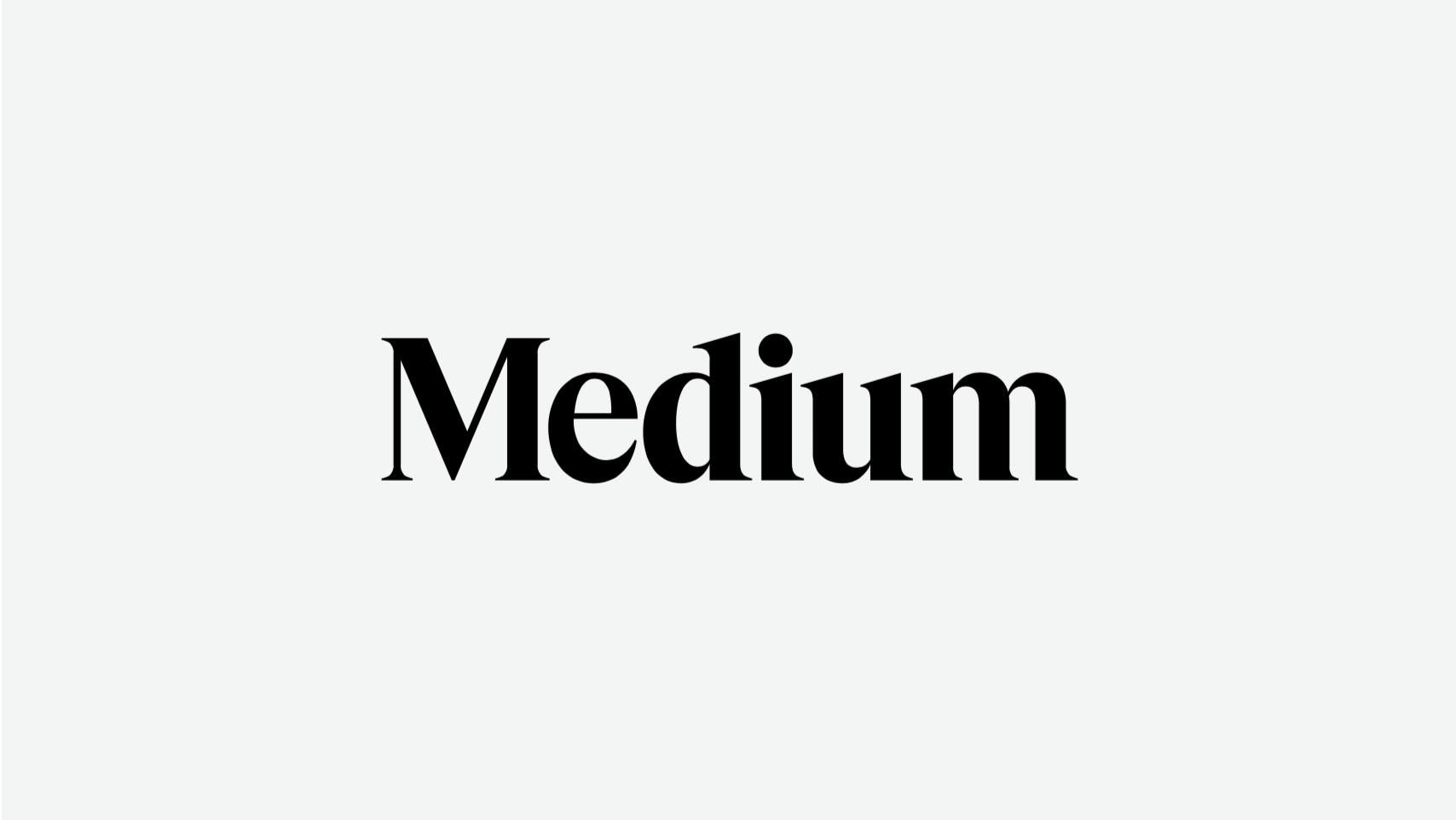 It’s time to do a Medium.com review.

The popular writing platform that generates tens of millions USD per year is a bit of an enigma.

Famous politicians like Hillary Clinton and even former President Barack Obama have published there before, and the monthly traffic Medium generates borders on 250,000,000 views.

Not only that, but each month they pay millions of dollars to writers who publish in their Medium Partner Program.

Given that this platform has a lot of power, many people wonder a variety of things about Medium, like is there a Medium news bias? How is Medium’s customer service? and How is Medium.com’s credibility?

I wanted to take this time to dive into all these questions and let you know a little bit more about Medium.com.

Ev Williams founded Medium back in 2012. The exact date was August 15, 2012 in fact. Ev was previously chairman and CEO of Twitter (which he co-founded), and he also founded the writing platform Blogger.

In October of 2008, when I was a freshman in high school, Ev Williams was named the CEO of Twitter, succeeding Jack Dorsey.

Two years later, he stepped down as CEO of Twitter and became a simple member of the board. Since 2012, Ev’s pretty much focused on Medium full time.

That’s the answer to the who owns Medium.com question.

Okay so let’s do a quick Medium website review so you know what the lay of the land looks like. 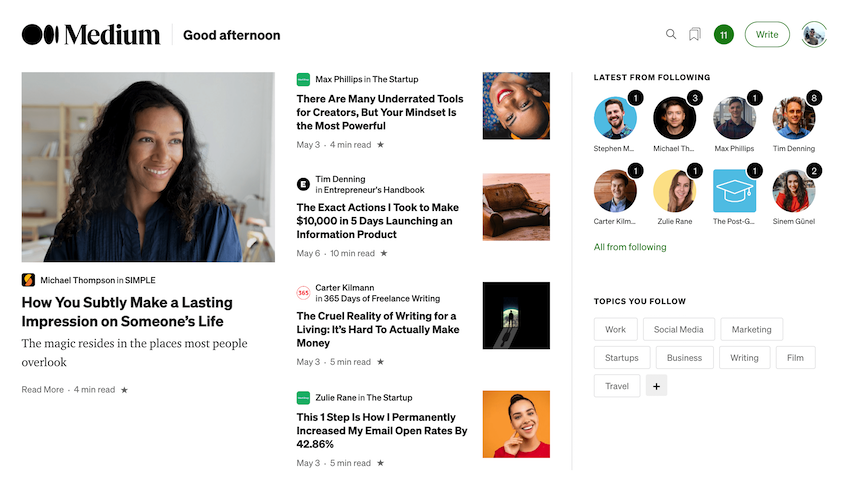 Here’s what the Medium homepage looks like once you’re logged in. At the top should be a bunch of articles written by authors that you follow.  On the right hand side you’ll see a “Latest From Following” section which I really like. Typically your favorite writers will occupy this window, and the numbers next to the profile picture represents the amount of articles they’ve recently published.

If you scroll down a little bit, you’ll see the “Trending on Medium” section. No Medium website review would be complete without mentioning this cool feature.

A lot of my friends managed to make it into the “Trending on Medium” section. If you make it onto that list, expect an avalanche of views, read time, and Partner Program Earnings.

Perhaps the greatest part of Medium in this Medium website review is the actual Content Management System. In plain English.. it’s the place you actually write your damn article. 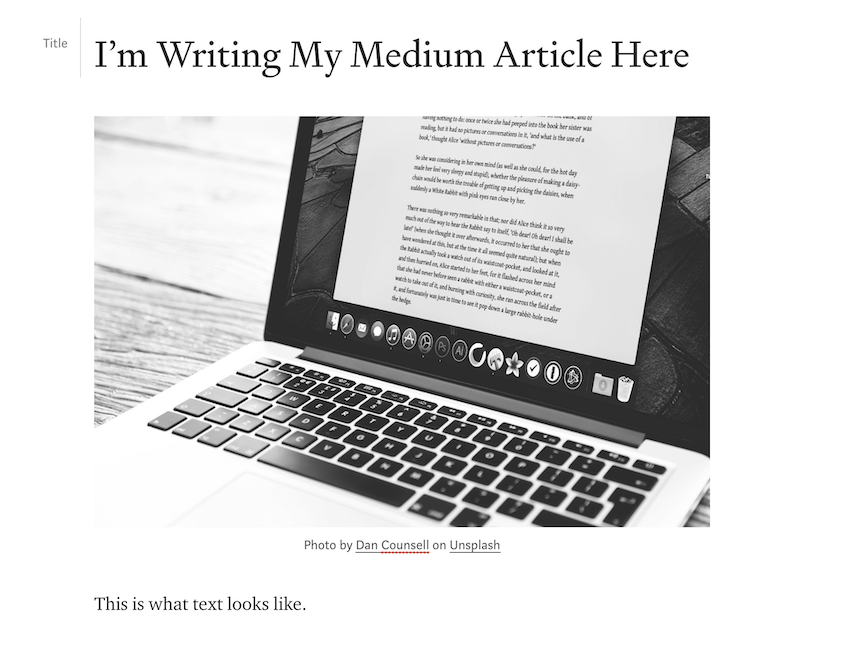 I write extensively about how to operate the Medium CMS in this article here. All you need to know for this Medium website review is that the CMS is minimalistic, clean, and lets the writer focus on their writing.

Where Medium falters a little bit, and something I need to talk about in this Medium.com review, is their reporting and stats pages. It’s not awful, but there’s a few features that I wish they’d implement.

This is what it looks like on the backend for people: 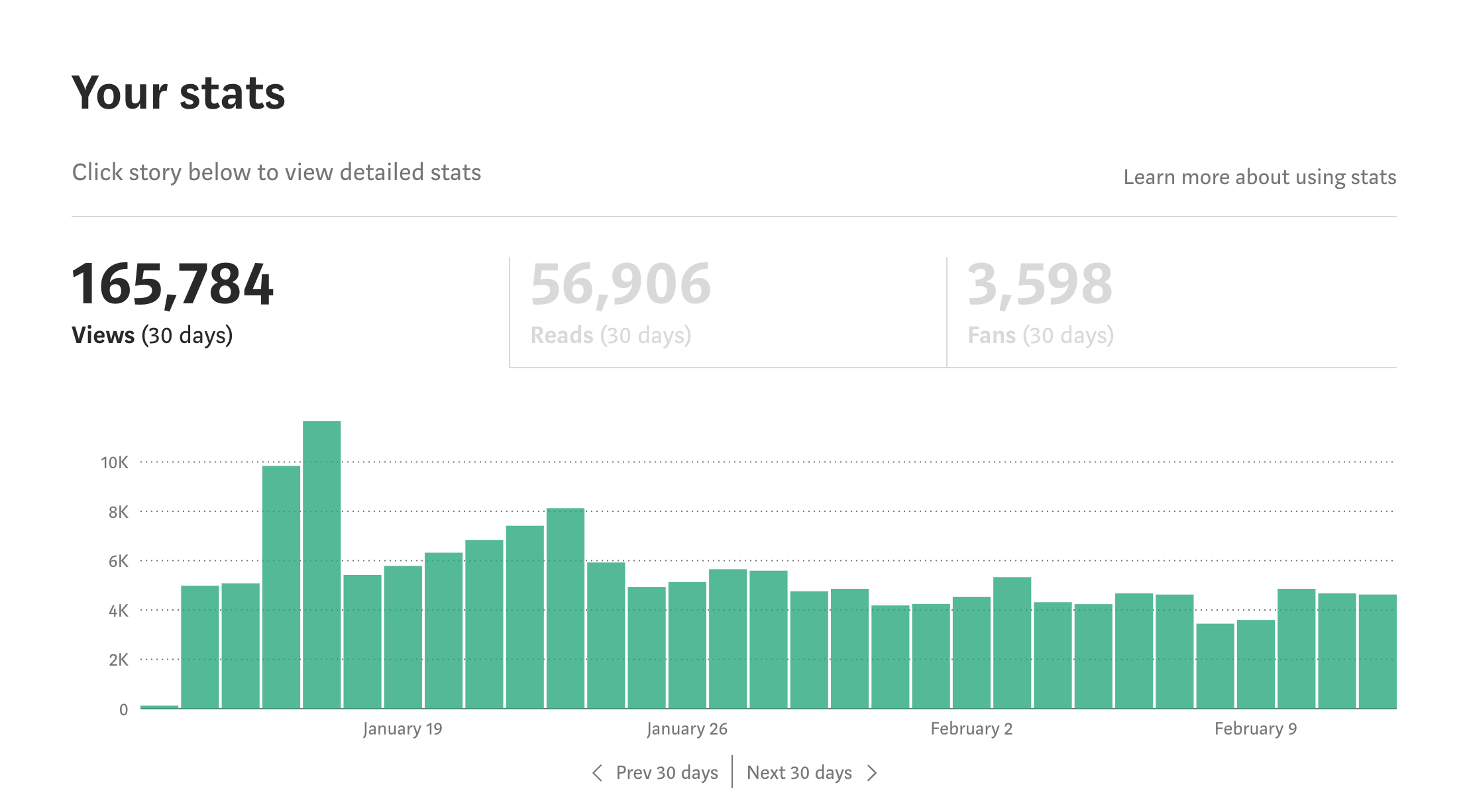 They allow you to see views for each day over the last 30 days, along with 30-day totals on views, reads, and fans.

If you scroll down a little bit, you can see stats for your most recent stories, broken down by views, reads, read ratio, and fans. 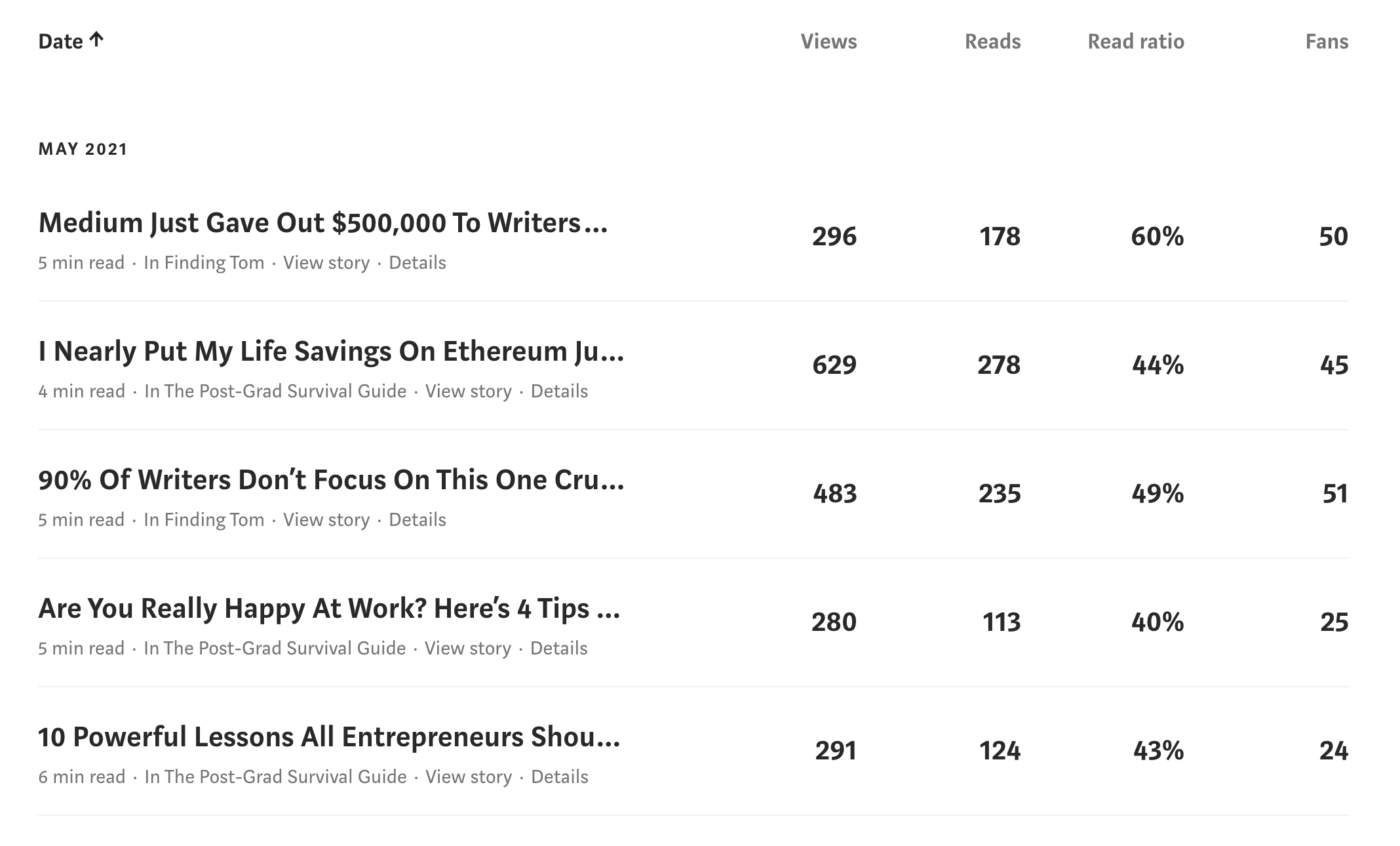 If you hit the “details” button underneath any particular story, you’ll get taken to a screen that shows you broken down, in-depth statistics on that particular story. You’ll be able to see lifetime earnings, read time, and views. 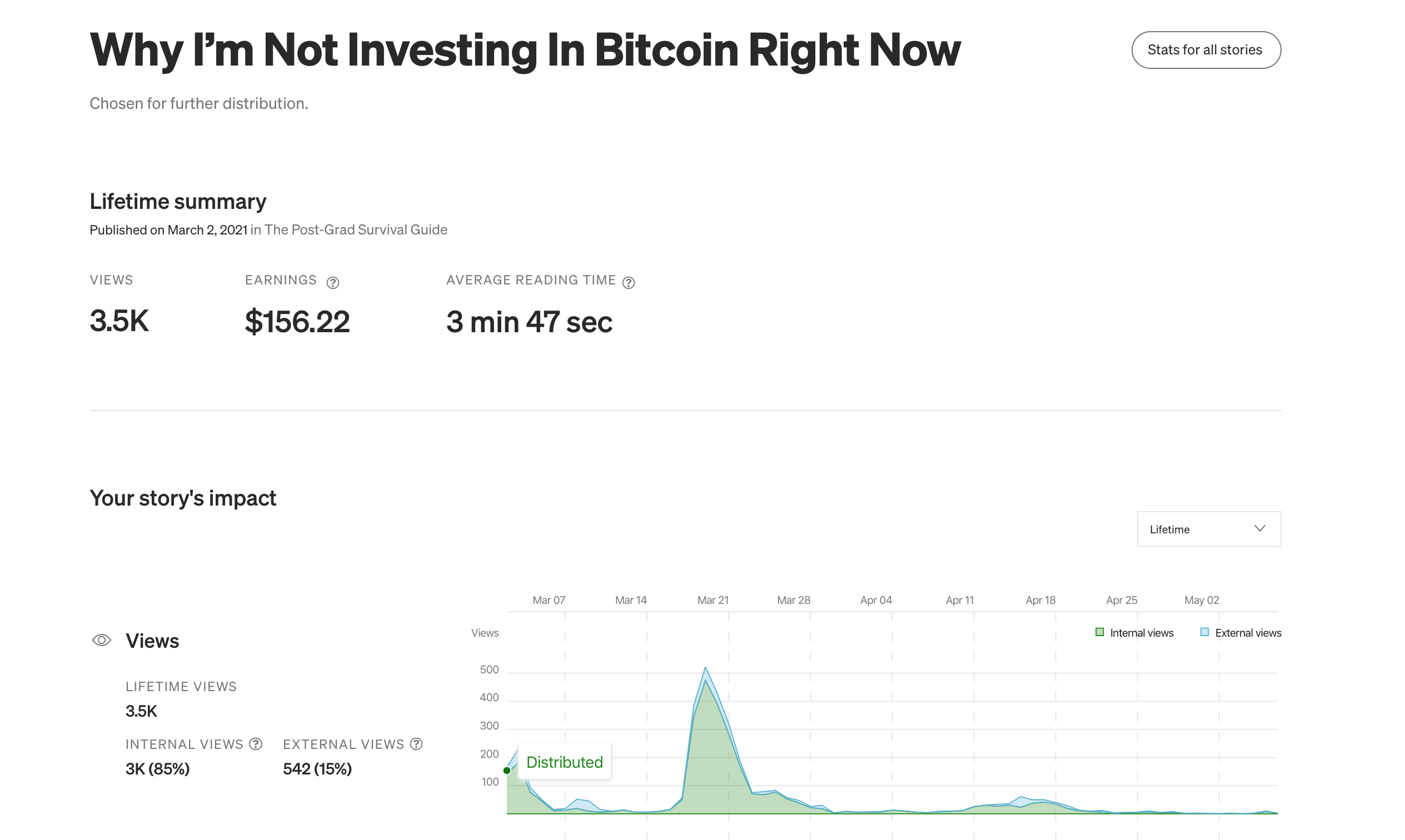 I have to say, the “details” feature is extremely helpful from a reporting perspective. You might ask me about the shortcomings I mentioned earlier. Well, I’d love to see top stories for the last 30 days. You can do that on a Wordpress site with a plugin like Jetpack. It’s just a small thing that would be very helpful to add.

Let’s talk a little bit about Medium’s Earnings page. For me, they knock this out of the park. 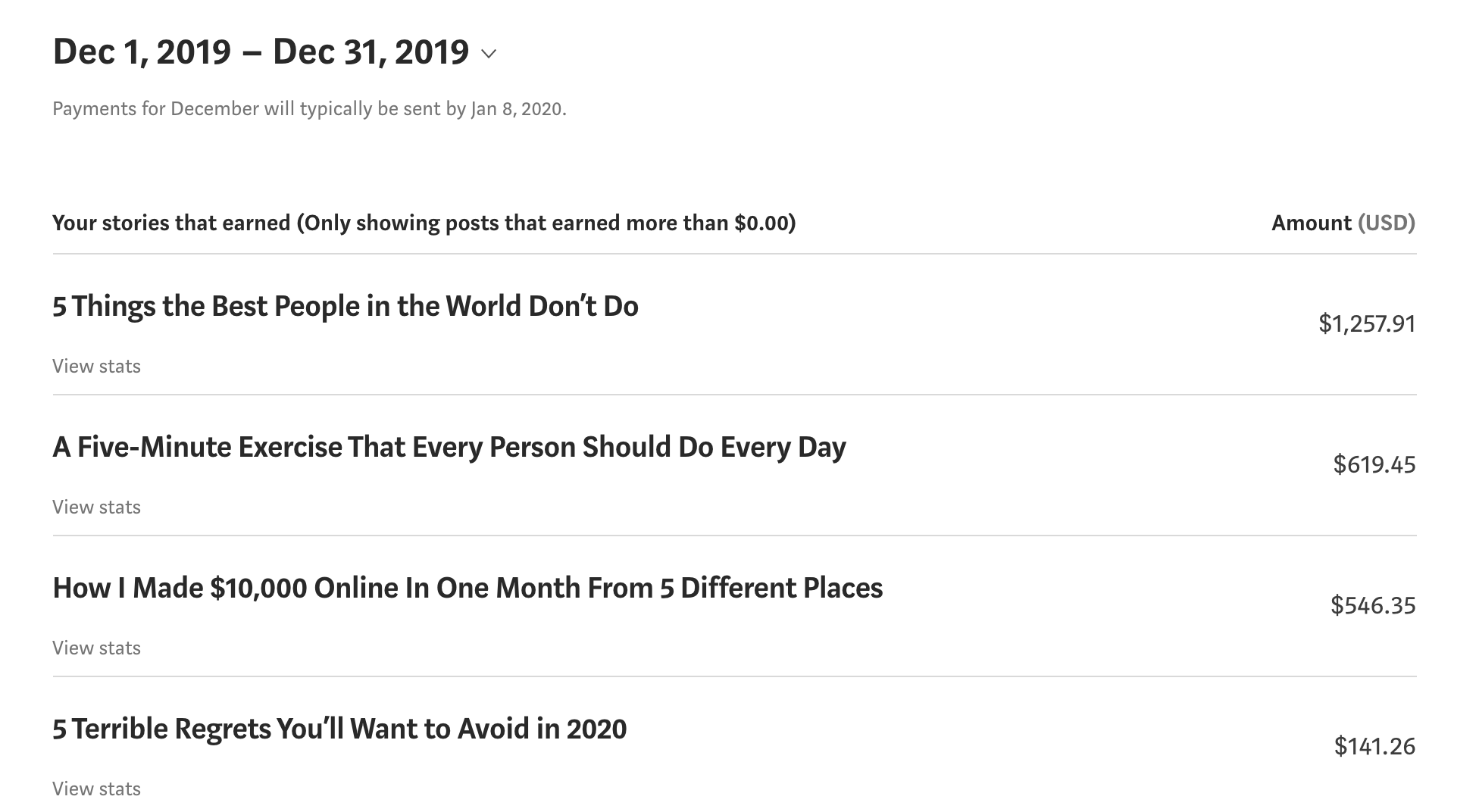 Finally, let’s talk about the last section of this Medium website review, which is what it’s like as a reader. For me, Medium REALLY gets this part right and it’s arguably the most robust part of their website.

They allow readers to highlight passages, clap for stories, comment, and even leave private notes for the author.

Do you see the gray highlight in the passage above? That’s an article from Zulie Rane and a few people highlighted that passage with their cursor.

You can also easily tweet articles and share them on other social media networks. Medium keeps their articles clean and minimalistic, and it’s stayed that way since I began writing there in 2016. I’m happy it has.

That’s it for my Medium website review of all their most prominent pages and features.

Is There A Medium.com Bias?

So, this is a tough question to answer. Yes, it does seem there is a Medium.com bias, but there’s also not one.

When it comes to Medium-generated content–or the posts that are created from IN-HOUSE Medium writers and Editors, it appears that there is a major left-leaning Medium.com bias.

For one, Colin Kaepernick is a board member at Medium. Hillary Clinton, Bernie Sanders, and Barack Obama publish on Medium extensively. When they do publish on Medium, Medium tends to distribute their posts to the masses like it’s a Sunday sermon.

Here’s a post recently written on Level, one of Medium’s in-house publications that they directly oversee strategy for: 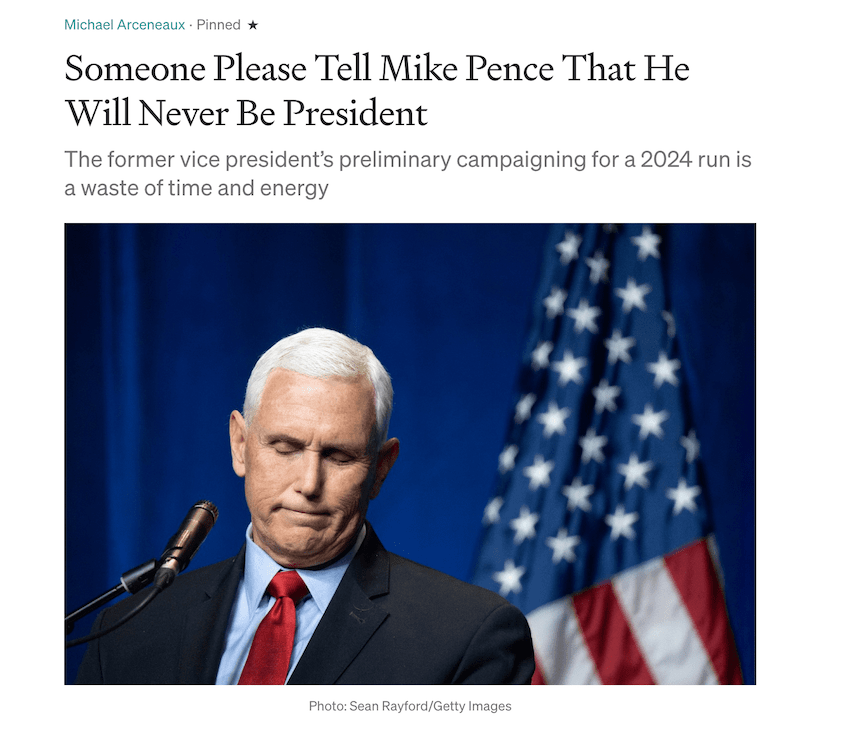 So yeah, there seems to be quite a heavy left-leaning bias on Medium among their in-house content. And, trust me, once you publish here extensively you start to see it everywhere.

I don’t care personally what kind of messages Medium wants to spread. Why? Because they actually give everybody a fair shake when we’re talking about user-generated content. For example, I’ve seen a post from Jordan Peterson make it onto the “Trending on Medium” list.

If you don’t know who he is, just ask any liberal about him and you’ll get an idea REALLY fast.

The left doesn’t like him, yet he managed to get into the Medium hall of fame–their trending list. It’s pretty incredible, and shows you just how much Medium has remained a fair platform, despite them actively hiring Editors and Writers to spread a left-leaning group of messages.

You got to give them props.

To answer the question, yes there’s definitely a Medium.com bias.

I would be remiss if I didn’t include that part in this Medium.com review.

Medium Fake News – Is There A Problem Here?

Is there a lot of Medium fake news? Like, fake news stories written on Medium? Honestly, not really. Medium isn’t even looked at as a news website anyway. It’s more just a place to find personal stories from indie bloggers–not journalists.

Since nobody looks to Medium.com to satisfy their news fix, and since a lot of the content is user-generated, there is not that big of a fake news threat here on Medium.

Judging Medium.com’s credibility is a bit hard because Medium isn’t exactly any single entity. There’s thousands of writers publishing here every month, and so if someone were to judge the whole platform based on any one person’s behavior or post would be a bit short-sighted.

Overall, though, if you made me comment on Medium.com’s credibility, I’d say that it’s in extremely good standing with the public.

Medium paid out millions of dollars to in-house writers and editors for a couple years. They worked very hard (and spent a lot of money) on creating quality content with their numerous Medium publications. This definitely helped their case in the public eye.

Also, huge figures have published on the platform like Barack Obama, Ryan Holiday, Benjamin Hardy, and James Clear. All of these celebrity appearances have lended themselves well to Medium.com’s credibility.

For me, I’d say Medium is the most credible social media platform on the internet.

How Is Medium Customer Service?

Medium customer service is very responsive. You can go to yourfriends.medium.com or help.medium.com to reach them with any concerns you might have.

You actually used to be able to email them at yourfriends@medium.com and they’d get back to you relatively quickly. Sometimes you could email them to get a second chance at curation. Now it seems you need to visit a web page to contact them.

One other thing that Medium customer service does is they send out surveys asking users if they want to participate in a feedback call for a quick $50-$100 payday. Medium loves hearing feedback from its users, and that in turn helps them build a much better platform.

I always thought this was a cool gesture worth mentioning in this Medium.com review.

Generally, Medium is a wholesome platform that doesn’t have a lot of the negativity that Twitter and Facebook are so well-known for. The users generally create quality blog posts, and Medium itself pays out significant cash to writers to make sure it stays that way.

Here’s my final points from this Medium.com review:

Well, that’s it for my Medium.com review. What do you think of Medium? Let me know down in the comments.