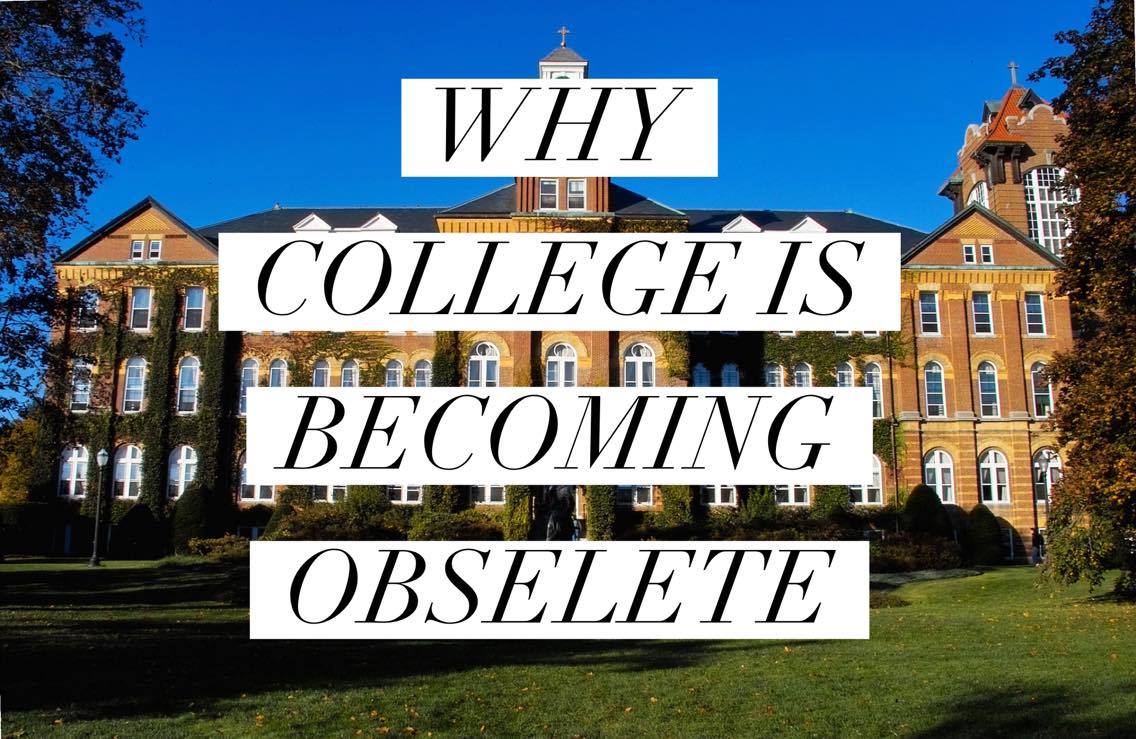 I learn through Google searches. Anything I want to know can easily be found in a matter of seconds. I can become (pretty much) an expert in something overnight. It’s truly an INSANE new world we live in.

Don’t know how to change your oil? Youtube it.

You’ll be getting grease on your hands in ten minutes.

We live in a world where knowledge is just seconds away. Why go to college if this is the case? I was never taught about copywriting, blogging, or journalism in school and yet I get paid to do all three of those things now. Know where I learned how to write? The internet. My own research. Books.

Reading Strunk and White was probably the best thing that ever happened to me as a writer. What I’m saying is that I spent upwards of 60k for a degree and I’m not using it. My own accomplishments thus far are more impressive to clients than a degree.

But what about those who are studying medicine? True, these people do need college, however much of what they learn in school can be learned on the internet and in books. It’s only when they have to learn how to suture or put in an IV that they need to actually be in a classroom setting to experiment.

People probably won’t agree with me, and that’s fine! In a classroom setting you do get to have discussion, be corrected by a teacher who knows what they’re talking about, and physically practice things if that’s typical of your major.

However can’t we do these things on internet forums? There’s plenty of thought leaders on the internet that are even more proficient than a professor in certain topics. Not to mention that half the kids in your class don’t even want to be there. On forums everybody is there because they enjoy it.

I don’t know, I could be extremely naive, but I could’ve learned everything I learned in college about marketing through a google search, and that really sucks, doesn’t it?

I could’ve taken it a step further by constantly looking in the news for new marketing trends and pondering why that certain video went viral.

Here’s my biggest argument, though: we learn by doing. We learn by failing. I’ve learned how to write well by doing it and failing at it day in and day out. Do you think all my clients were happy with my work? I made a lot of mistakes early on that made me a lot better today.

There’s no involvement in college. There’s no DOING.

In college you’re learning by just sitting there most of the time. It’s honestly a horrible way to go about it. Why can’t teachers involve us more?

“Tell me and I forget. Teach me and I remember. Involve me and I learn.” - Benjamin Franklin

There’s a part of me that thinks colleges will never actually go obselete–that there’s always going to be value in that piece of paper you get at graduation. But the reason why it’s valuable is because the job world values it.

It’s difficult to measure how smart someone is if they don’t have something that’s a benchmark for that. A degree shows you’ve gone to school for four years. If you don’t have one it’s tough to show how much you know about something. But why does a degree show you know something? Just because you went to school for four years doesn’t mean you’re valuable. You could’ve been sleeping the whole time.

I don’t know. My main argument is that anything you learn in college you can now learn on your own. Maybe I’m wrong about that, but in my experience I’ve learned way more on the internet than at college.