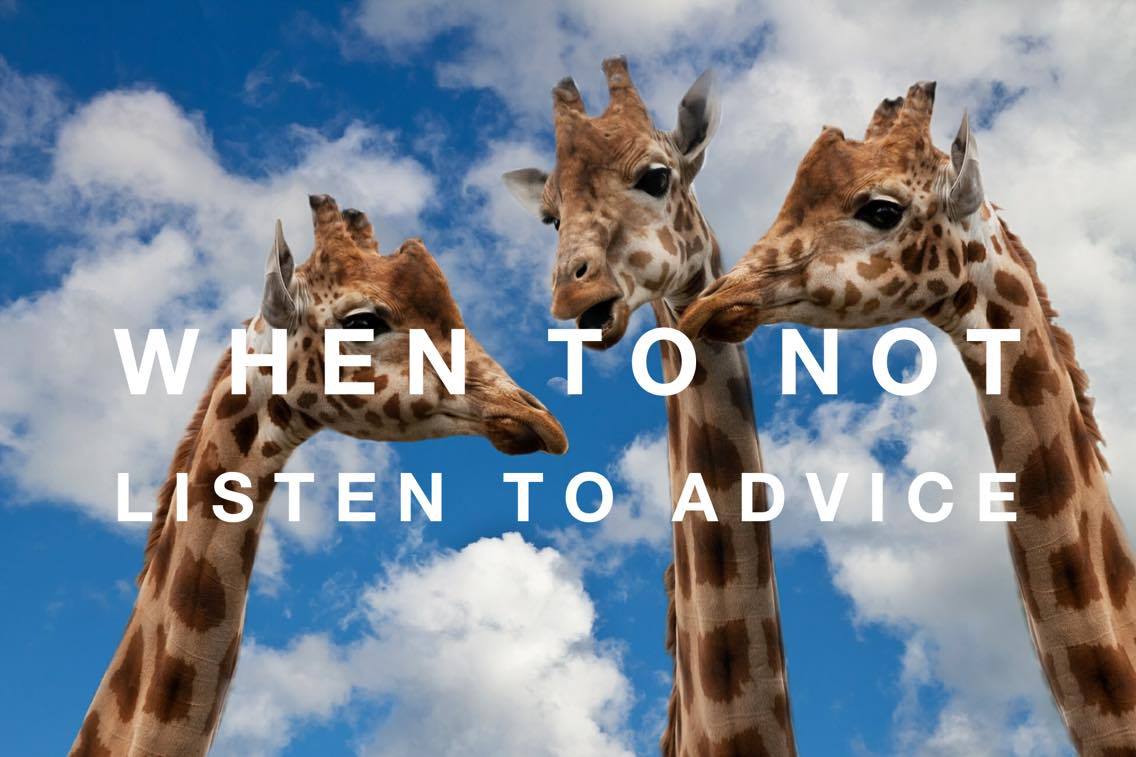 Yes, those are giraffes.

Oh man. This is a tough one for me because I hardly listen to anybody. Sometimes not listening has hurt me, but sometimes it’s actually helped me. Let me explain.

First, when should we listen to advice? My Mom’s helped me make life decisions about relationships that were spot on. Even though I wanted to do the opposite, I found that what she said was right later on.

I may have some disagreements from you, and that’s fine, but I find that most people make some pretty dumb decisions when it comes to relationships. We’re too blinded by love to realize that we’re actually not that compatible. Instead of getting past the initial heartache of a breakup, people pay the price years down the road when they’ve already committed to a relationship.

On the other hand, love is love, and sometimes people won’t like your partner no matter what. In these instances, my advice (I know, somewhat hypocritical) would be to see if one person’s feelings is just that–one person’s.

Some other times you need to listen to advice are in sports (from coaches), in school (from teachers), and when people advise you on your own morals (parents, leaders, etc.).

This list obviously doesn’t always work. Sometimes a coach might advise you the wrong way. Sometimes leaders might be crazy and guide people down a horrible path. But more often than not, there’s something to learn from our coaches, teachers, parents, and leaders.

For the people reading this who are independent and risk-takers, no amount of advice from people who aren’t independent can help us.

People love security, and making “logical” decisions. That would mean working a steady job with a salary and benefits–which is fine. You’re secure. But what about that part of you that hates it? Is it logical to feel like a caged bird your entire life just so you can pay the bills? Absolutely not.

When it comes to what you want to do, do yourself a favor and listen to nothing but your own heart. Nobody should make that decision for you.

I used to work at Panera Bread like 8 months ago and absolutely hated it. The managers were mean, the work was stupid difficult, and I was making minimum wage after college. My goal was to work my way up and become a manager or something.

After my first day there I knew I never wanted to be a manager of Panera Bread. I called my Mom and asked her what I should do, and she said I should stay. Meanwhile in the back of my mind I really wanted to be a freelance writer.

I felt so down in a new city, far from home, but something incredible happened. I actually kind of made it in freelance writing. I learned all I could, dedicated all my time to it, and now I’m doing pretty well. Thank God I didn’t stay.

My Mom gave advice regarding my job that didn’t work out for me, but she gave me incredible advice about a relationship that I know deep down was the right direction.

My advice is to follow your heart when it comes to what you do.