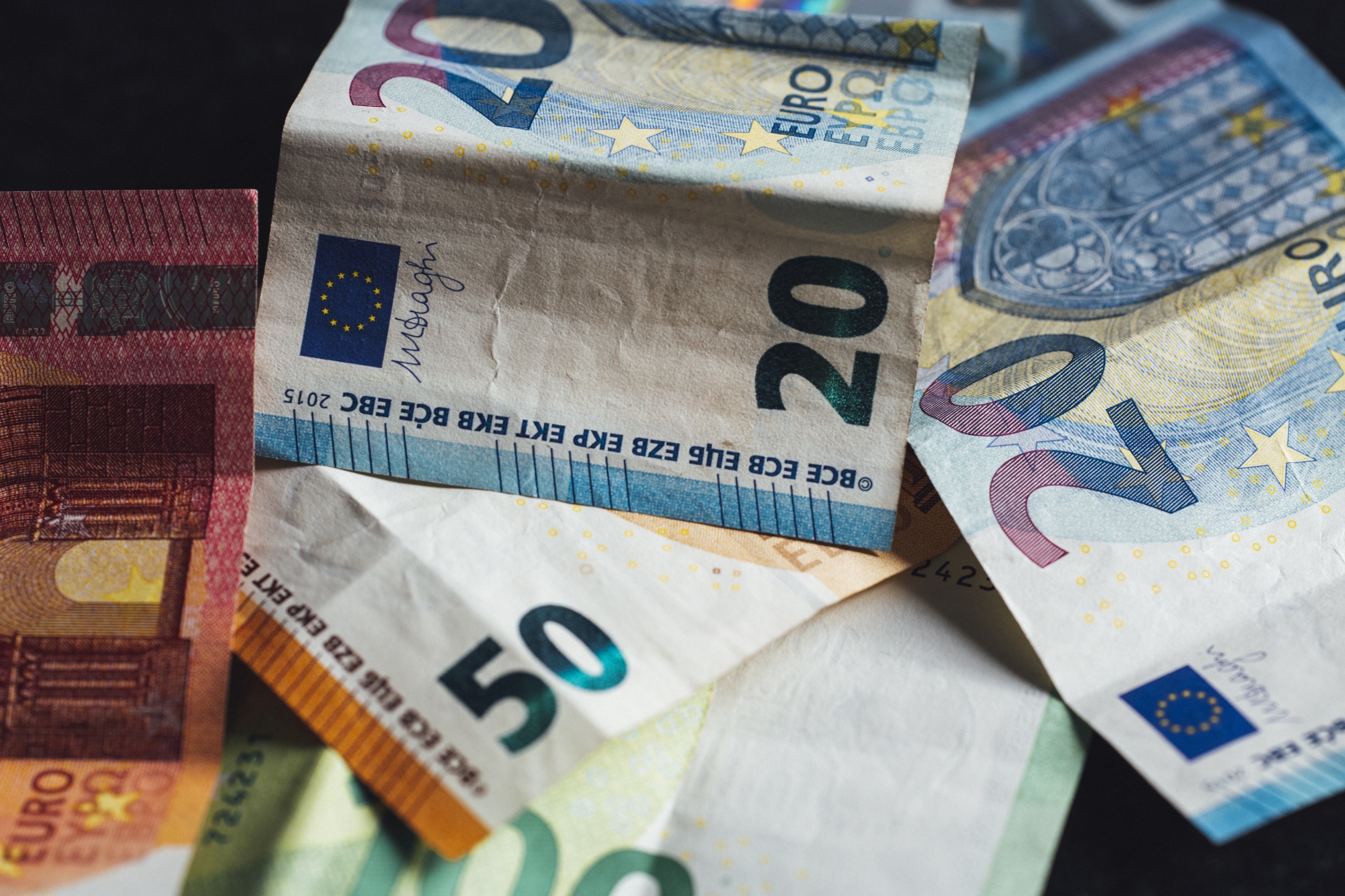 “I retired in five years.”

That’s what Grant Sabatier wrote in his book, Financial Freedom. Grant starts the book off talking about how he had $2 in his Citi Bank Account in 2010. He was at rock bottom, living at his parent’s house, and too depressed to do much of anything.

Then, like a miracle, he turned it all around within five years. Now he’s a millionaire.

His book is incredibly useful and inspiring — let’s get that out of the way.

The problem is, he spends 85% of the book talking about ways to save and invest money, and very little talking about the ACTUAL way he retired in five years.

After reading so many books on this subject, I’ve realized many of the authors don’t talk enough about the real way they made a million dollars and beyond.

Grant would have you think that investing large sums of money into the stock market — and their eventual gains — made him a millionaire.

That’s not true at all.

There’s this fascinating graph he shows near the middle of the book that breaks down how many years you can retire in if you make X per year, spend Y per year, and invest the difference. 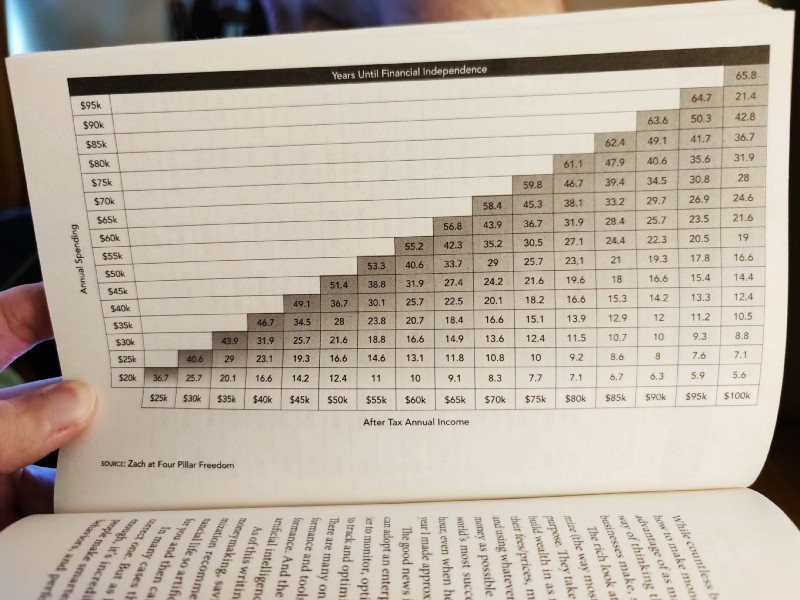 You can see that out of the 136 combinations above, there’s literally only two in which you can feasibly retire after 5 years.

So, what these personal finance experts aren’t telling you is that you must make egregious amounts of cash to retire early.

That’s the finance advice everybody conveniently leaves out of their books.

My suspicions were confirmed later on in the book, when Grant revealed his income and expenses over the 5 years he managed to save a million dollars. 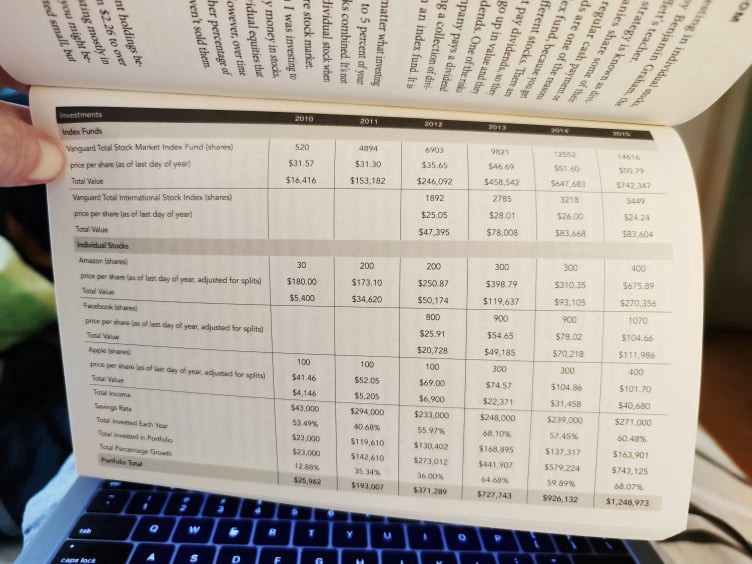 The picture’s blurry, but just know that he made over $200,000 in each of the last four years before he retired.

Well shit, Grant. Making that kind of money is going to allow anybody to retire.

Therefore these books need to focus more on side-hustles and making money than investing and saving.

But many experts know they need to capture the attention of the masses, and making hundreds of thousands per year isn’t exactly relatable to most people. So they focus more on penny pinching and investing and retirement accounts.

Nah, bruh, the secret is.. you need to make a fuck ton of money.

Therefore, this book shouldn’t be named Financial Freedom, it should be named How To Make $200,000 Per Year And Retire Early.

Here’s What You Actually Need To Do To Retire Early

The first thing you need to do is build a money-making machine. If you have a traditional 9–5, and your employer does 401K contribution matching, then max out your 401K every year.

On the side, when you’re not working, you need to develop some sort of a side hustle. Grant talked about how he flipped domain names, created ad campaigns, and started a blog to make money. Think of similar ways you can make an extra $2,000-$3,000 per month.

Type “side hustle ideas” into Google and there should be a bevy of search results and information.

I go over how to make over $5,000 per month with online courses in another blogpost. Consider reading it to learn about my own personal money-making machine.

Is Investing As Hard As We Think It Is?

Investing really isn’t that hard. Buy an index fund that replicates the American stock market and hold it for decades. Done. At least, that’s what all the books tell you.

My point is, the bulk of the work that’ll get you to early retirement has little to do with investing and more to do with building money-making machines.

Once you got a nice income stream, it’s as easy as opening up an account and investing in index funds.

Freedom Is A Very Important Factor To Early Retirement, Too

I pay $500 for my 2-bedroom apartment in Metro Manila. That’s with utilities and everything. I quite like my apartment — even the cockroaches that peek out around 2 AM.

I simply wouldn’t be able to find a 2-bedroom apartment for $500 per month in America. If I did, it would be the steal of the century in a town that’s likely incredibly far from civilization.

Most folks lose 5–10 hours of their week getting ready for work and transporting themselves to and from their job. I don’t have to worry about stuff like that.

In my favorite finance book, Quit Like A Millionaire, authors Kristy and Bryce talk about how traveling the world was actually less expensive for them than living in the States or Canada. That’s fascinating.

I don’t own a car. Because of that, I don’t pay insurance on a car. A doctor’s visit costs me $20 here. Back home in America one consultation would be at least $300. My medicine costs me 1⁄4 of the price here than it would in the States.

It’s incredible how freedom from a single location can drive your costs down.

These are variables I don’t see the authors talking about enough, too.

At the end of the day, we need to stop focusing so much on investing and saving — we need to focus on making.

Once you grow a few money trees, all this personal finance stuff comes as easy as apple pie.