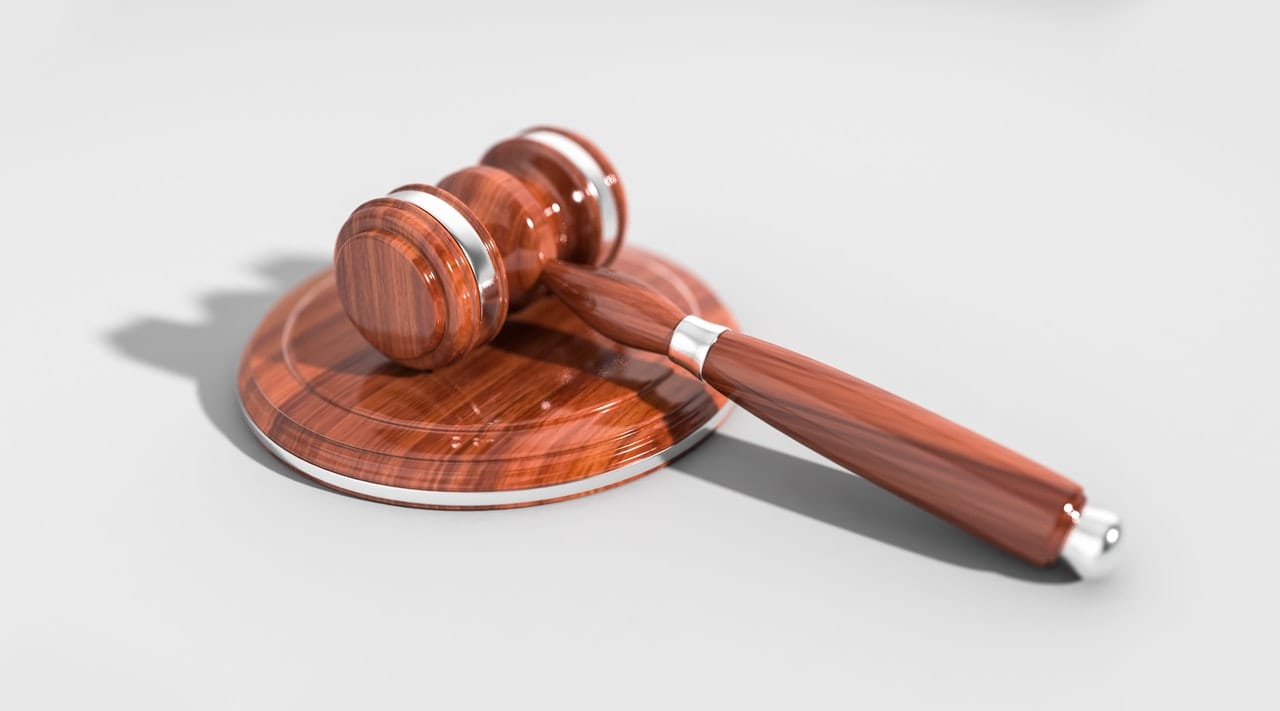 A few weeks back I stumbled upon an acronym that would, unbeknownst to me, later become synonymous with Satan.

I don’t mind why the regulation is in place–it makes sense why the GDPR exists–I just wish the tools I used would help me become compliant a little easier.

Okay, so what’s the GDPR?

Here’s what it means in layman’s:

If you have an email list, you need to get people from the EU’s consent to send them further marketing-related emails.

They need to know precisely what they’re getting into.

*NOTE* I’m horrible with details. I probably missed a bunch of details in that. Don’t take what I say in this article for gospel and please consult with a lawyer before you do anything about GDPR.

This doesn’t sound that bad, but then I heard that you need to screen your existing list to see who is from the EU and who is not and get their consent before May 25, 2018–when the regulation comes into effect.

It’s pretty much impossible to figure out who is from the EU and who is not for pretty much every email marketing provider ever.

I use ConvertKit, and luckily they’ve created a few features to allow me to see which subscribers originate from the EU, but for everybody else using Mailchimp or Aweber or something, it’s not as easy.

So that means if a blogger not using ConvertKit actually wants to sleep at night knowing they won’t get a 20,000,000 Euro fine (yeah, seriously), they need to get consent from their ENTIRE email list of people (since they don’t know who is from the EU or not).

And here’s the final kick to the groin…. The final “Thanos finger snap” if you will…

So that means if you have a list of, I don’t know, 3,000 people, you can only count on about 150-180 people ACTUALLY confirming they want to be on your email list still.

Oh no, it’s worse than a Thanos finger snap.. (because his finger snap wiped out half the population not 94-95% of it)

Is this more like the Black Plague? I guess so. I’m not sure how many people died in the BP.

And here’s yet another kicker. Your email is probably going to look something like..

*So, yeah, do you want to keep receiving marketing related emails from me? Let me know by going completely out of your way to click this here link to go to another page to check two check-boxes before going to another thank-you page after that.*

I’d REALLY appreciate it. This whole GDPR nonsense sucks, and I don’t know which one of you is from the EU or not!

Do you really think someone is going to go, “YEAH, I DEFINITELY WANT TO KEEP GETTING MARKETING RELATED EMAILS FROM YOU. Let me quickly check these two boxes that make it sound like I’m going to get even MORE spam in my inbox (even though I know you and click on your emails all the time).”

The answer is not really.

It’s gonna be hard. Again, this GDPR nonsense makes me want to throw up.

Luckily I know what I’m going to do about it moving forward. Here’s what..

What I’m Going To Do About GDPR

Okay, so to be clear, I collect email addresses from three different places. First, sometimes I drive people straight to WebinarJam’s hosted landing pages so they can sign up for my webinars.

Second, sometimes I collect emails over on Mailchimp (even though I don’t use Mailchimp anymore) because there’s still a few old posts that link to my old opt-in bribes/Mailchimp landing pages.

So to become compliant, I have to wrangle in these three methods of gaining subscribers.

Since I don’t use Mailchimp as much, I just made sure to make all my forms GDPR friendly. I only collect emails for two lists, so that took me all of 5 minutes.

There’s also a special way to segment subscribers when exporting them based on whether they want to receive further emails from you. From now on I’ll just export ONLY those subscribers who specified they wanted future emails from me over to ConvertKit.

I’m also going to do one last export today, ten days before the GDPR takes effect. I’ll tell you why in a second.

WebinarJam has sucked in terms of letting any of their customers know what the heck they’re doing for GDPR. You know why? Cause they’re not doing anything about it. They aren’t taking it seriously to be honest.

I emailed their customer support and this is what their agent told me..

What exactly does “watching the GDPR situation closely” mean? It doesn’t sound like they’re “doing” anything. They said “watching” not “doing.”

After scouring the Google (yes, THE Google) for a few minutes typing in lots of variations to “GDPR COMPLIANCE WEBINARJAM,” I found absolutely nothing. It’s like the company as a whole is ignoring it.

So that means I have to take matters into my own hands (which sucks).

I may quit WebinarJam, which is a shame because I was REALLY loving their software.

So this is what I’m doing..

Maybe this can change one day, but for now it’s what I have to do–and you can be damn sure it’s cutting into my bottom line (which really pisses me off because blogging is my livelihood).

Okay, so here’s where everything comes full circle.

ConvertKit has this amazing feature that allows me to know which people are from the EU and which aren’t. As of right now, only about 568 subscribers of my list of 4,300 are from the EU. 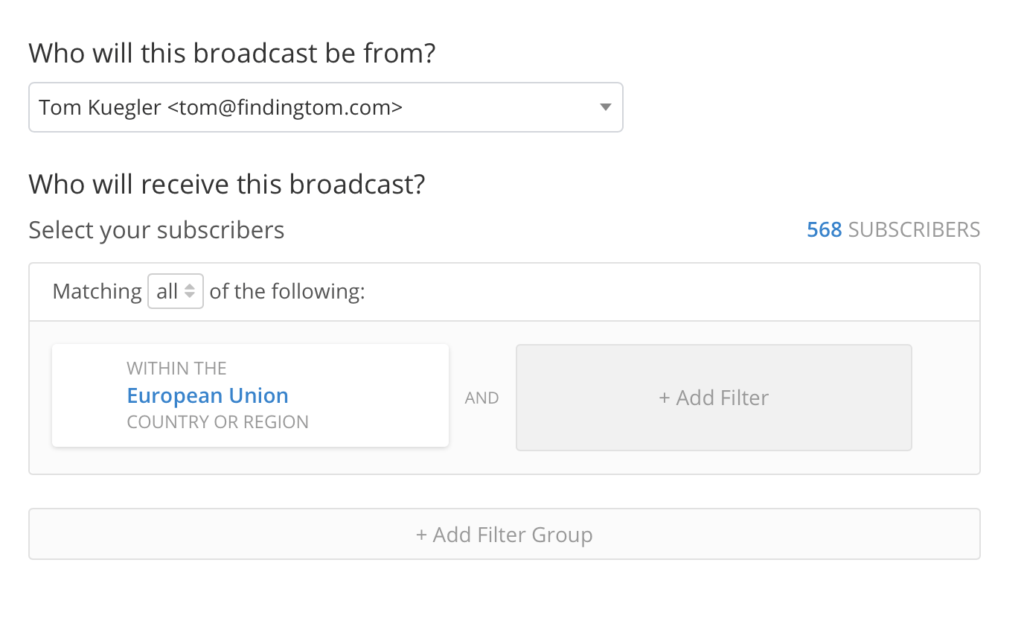 I’ve basically come to accept the fact that I’ll probably be saying goodbye to all of these subscribers.

But that’s a lot better than saying goodbye to 95% of my list, don’t you think?

(ConvertKit, this feature has single handedly saved me so much money–thank you)

The only problem (and I mean only) is that I can’t tell whether any email address I physically import from other places (like Mailchimp or WebinarJam) is from the EU or not..

BUT, when people open or click on an email of mine, ConvertKit can then figure out if they are. *BINGO*

So, tomorrow (9 days away from GDPR armageddon) I’m going to do a couple things..

That way the flow of “unknown” subscribers from Mailchimp and WebinarJam is cut off, which is important. This also means I should be able to vet the subscribers I just imported from Mailchimp to see if they’re from the EU by sending an email that they’ll probably open.

Remember, all ConvertKit needs is for someone to open an email in order to see if they’re from the EU or not.

You might be saying “well, Tom, what if someone who was imported didn’t open the email?”

Well, that would most likely make them a cold subscriber in ConvertKit’s system. I’ll be ruthlessly deleting all my cold subscribers before GDPR armageddon (and after) to hedge my bets.

Then, on Thursday (May 17), I’m going to send an initial email to my list of EU residents telling them that if they want to keep receiving emails from me, to really quickly consent to doing so.

Then I’m going to do it again and again every day until GDPR Armageddon.

Then, before May 25, whoever from the EU that didn’t consent will be unsubscribed and left out of all future emails.

In a nutshell, that’s my way of cleaning up the mess that is my email list for GDPR.

I heard you need to get registered with  the ICO and all that good stuff but I took the test and found I didn’t need to be registered. I don’t know, the test was really weird and hard to understand to be honest. I tried to answer the questions to the best of my ability.

My Final Thoughts About GDPR

Nobody knows how the EU is going to enforce the new GDPR regulations.

Will they check someone out after someone complains? If so, I feel REALLY good about what I’ve done. I don’t think the maybe 2-3 people from the EU who slip through the cracks of my above process will go out of their way to inform anybody that they’re getting emails from a 25-year-old who just wants to see them succeed as a writer.

The fact is, I won’t be emailing anybody from the EU after May 25 (at least to my knowledge). What makes this difficult is the fact that so many subscribers have come from so many different tools/platforms.

The truth is this world isn’t a perfect one. Reality needs to be taken into account here. There’s going to be a huge portion of bloggers that do absolutely ZILCH about GDPR, a good portion that do a good bit, and a small portion that basically deletes their entire list because they’re scared shitless.

It’s up to you what you want to do.

You basically just can’t email anybody from the EU if they didn’t expressly tell you they wanted to hear from you after they opted in. Constant cleaning of your list along with, for ConvertKit users, leaving out anybody from the EU should do the trick.

Is there anything I’m missing?

*Speaking of good GDPR opt-in form examples, want to build an audience of your own on Medium? I have a free 5-day email course called “Your First 1,000 Followers” that will teach you how I did it!* Sign up for it below!

NOTE: This post did contain some affiliate links. I use all the products I recommend, though. If you click through and make a purchase with some of these links, I may make a small commission at no extra cost to you.