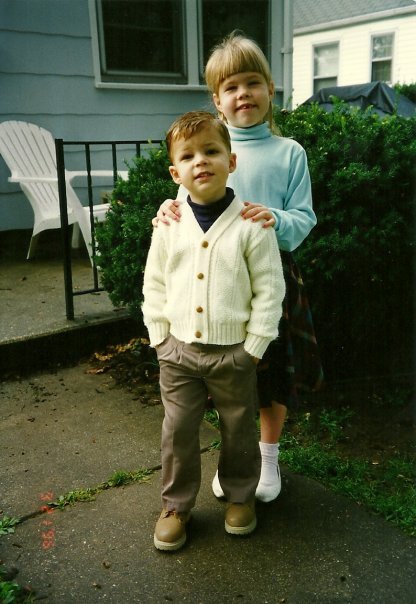 Get your tears ready.

You didn’t really think I’d just leave you out of this little familial shindig, did you?

Truthfully I’m happy I just drank a cup of coffee because it gave me a lot of energy, and everybody knows you have a lot of that–which is something that everybody also loves (including me). It’s probably why you feel so close with Heidi, you know, our sack of fur who basically darts off the walls like a rubber ball everytime both of us come home.

What will I remember? Fist fighting with you in the basement when I was five and getting beaten to a pulp. That’s right, I learned from you my friend. I guess it’s something that every little sibling has to go through.

Inevitably, we all must be beaten up like Rocky was by Clubber Lang in the beginning of Rocky 3. PAIN.

Do I hold our former royal rumbles against you? Absofreakinglutely. Joking. Not really.

You can tell the coffee is kicking in, can’t you? I hope you’re laughing right now.

What do I remember about you? What are your traits? I remember you saying hi to me in the hallways of our school and talking with me when I was young. I was a hot mess back then, unworthy of any attention, but I always got it from you.

I remember watching Sabrina The Teenage Witch (I think that’s what it was called) in your room after school. I remember you dancing to that song at the end of Tangled which will always make me laugh.

Like, if we ever don’t speak to each other again because of something (which won’t happen), all you have to do is play that song and dance and I’ll be rolling on the floor.

Nobody makes me laugh more than you, and nobody ever will. Steve is a pretty close second and so is Dylan (shout out Dylan) but you, my friend, are the Queen.

Remember when we made that video for your class? Screw Dicaprio, we both should have Oscars for that one.

Do you know why it was so good? I think I know. It’s because we match each other when it comes to feeling creative and being emotionally aware. I don’t mean to make it sound like we’re better than everybody else, just that we’re different.

It means you’re constantly trying to prove something–you’re trying to make your own mark and get in the spotlight yourself. And without an older sibling who gives up the spotlight for a second, a younger sibling will never feel whole. You allowed me the spotlight, and I’m so thankful for that.

Often times I think about the future and how much my kids are going to absolutely adore you. They’ll adore Rob too of course, but they’ll adore you like I adore you. For all the same reasons.

You’re just too much fun, and the strongest memories involve fun.

You might get to re-live our past by seeing the same look in my children’s eyes as the look I used to have for you growing up. I hope with all my heart that that happens. It’s almost a certainty that it will.

My children will remember you. My children might even grow up to be like you and pass that same spirit on to their kids. There’s a part of you that will never grow old, and that is so unbelievably awesome.

We’ve grown up. But have we really? Why do we continue to act young and laugh at pretty much everything? It’s because we remember how it used to be. It’s because we’re so in-tune with what makes each other tick that we can riff about something for a good thirty minutes until tears come out of our eyes. We’ll never grow out of that.

My sister. How lucky am I to be in the middle? I know things that you and Rob won’t know.  I know what it feels like to be an older sibling and younger one all at the same time. And just for the record, the middle child doesn’t get blamed for everything–just thought I’d set that straight.

I’ve looked up to you, and I still look up to you. You’re the leader, not me. Everything that you’ve experienced, you’ve had to go through alone. That makes you so strong in my eyes. And I don’t mean alone in the sense of friends, I mean alone in the sense that you’ve had no siblings go before you. Except in the case of me winning a state championship–I was the first to cut the ribbon for that path. Ahem.

Here’s to you, Rachel. Energetic, hilarious, and absolutely not a state champion.

You’ll always be the one ahead of me, leading the way. I do think about you all the time, and I always will. I have you to thank for these words. You’re the one that gave me three journals two years ago during the start of my college program. You have no idea what writing has done for me.

One day, far into the future, I hope I’ll go to sleep in my house and hear chatter from the other room well into 1 and 2 a.m. I hope I hear laughter, and movie quotes, and impressions. I hope they’re loud enough to wake up the whole neighborhood.

Then, and only then, I’ll know that I did it right, just like Mom and Dad did.

Thankyou, my sister, for being you.

I miss you too.