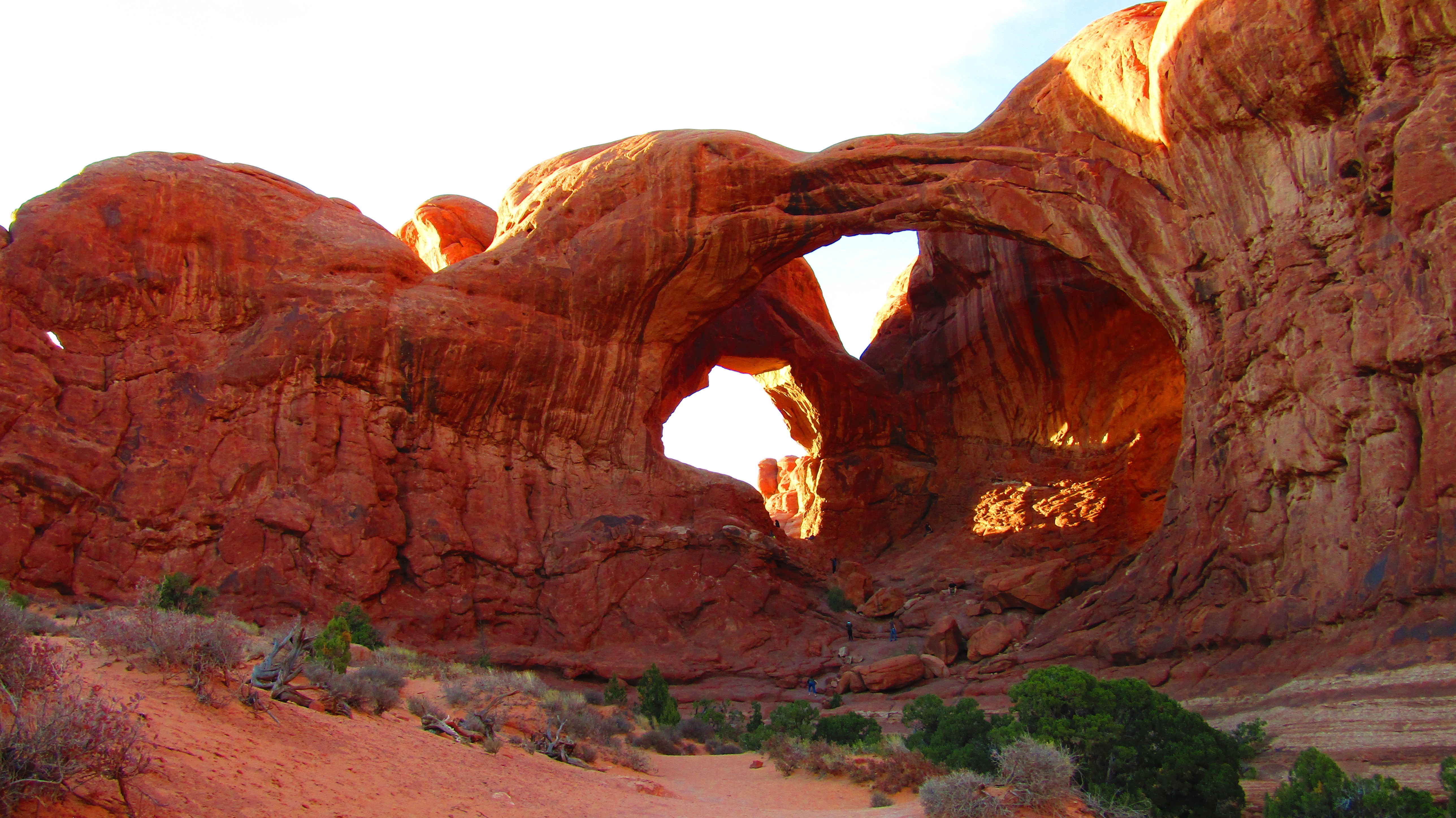 Arches National Park was good to me.

First off, I got there around noon and stupidly picked the most expensive campsite in Moab, Utah. It was $36 to camp there, and was the worst night of camping I had on this trip. More on that later.

It’s about three and a half hours from Salt Lake City to Moab, but you’d never guess it because the drive flies by. That’s because it’s beautiful, like every other drive through the American west. 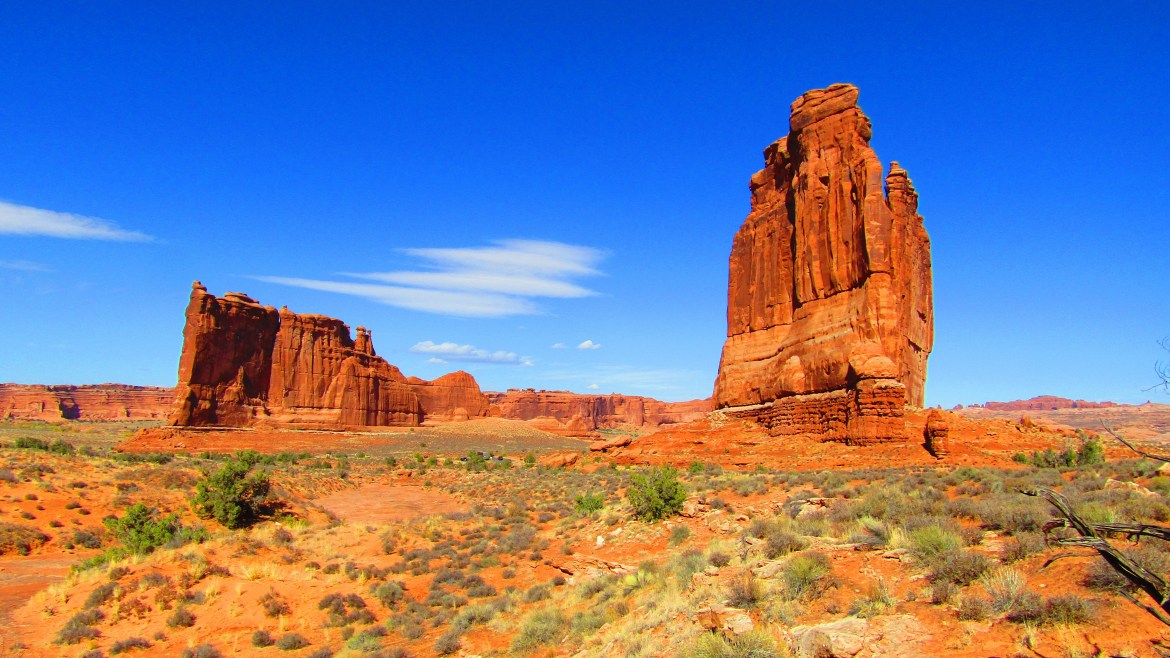 On that note, I love Utah because of the variety. It has mountains, big cities, and dry desert regions resembling Arizona. It’s like it took pieces of other states and rolled them into itself. I noticed this on my way to Arches, seeing for miles, up until the horizon got interrupted by strings of strong, tall mountains.

This was the American West. I was right in the middle of it. And I was awestruck once again by just how beautiful my country is.

Now, let’s get to Arches.

Going to Arches is like walking around on an Indiana Jones set. That’s because you are! Did you know they filmed The Last Crusade at Double Arch? I knew that blasted formation looked familiar.

Anyway. It’s the color here that’s so stunning. The deep orange of the rocks go perfectly with that light blue sky. It’s just incredibly satisfying to look at. 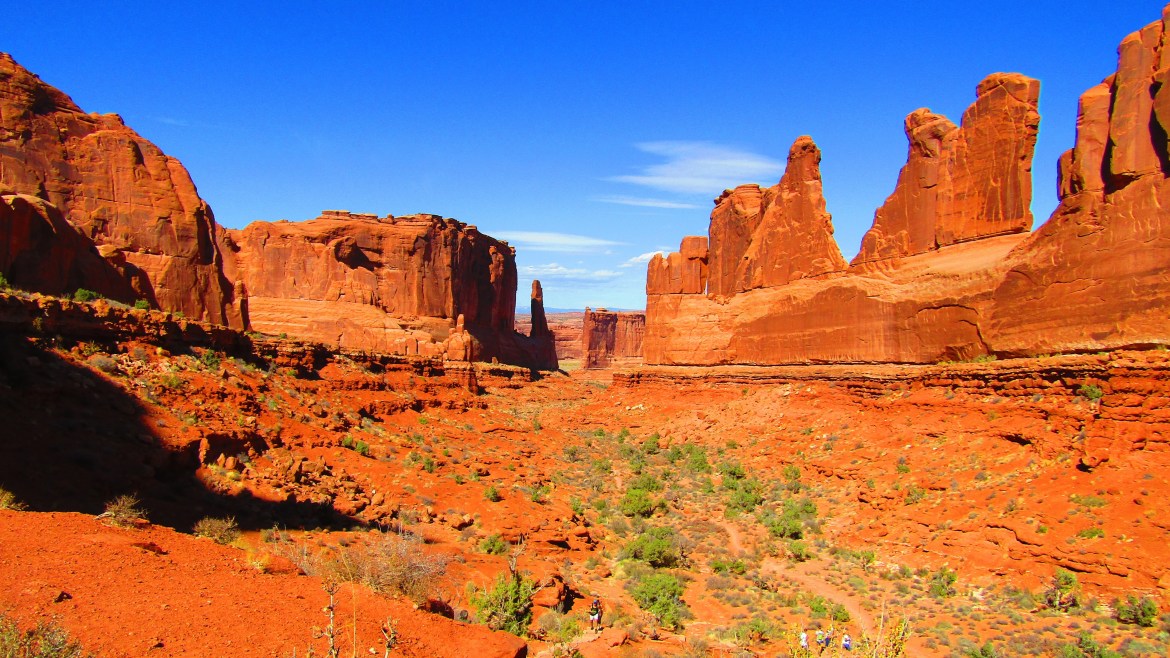 The heat only adds to the feeling.

I made the mistake/awesome decision of going off the trail to explore an arch maybe half a mile from the end of Park Avenue. 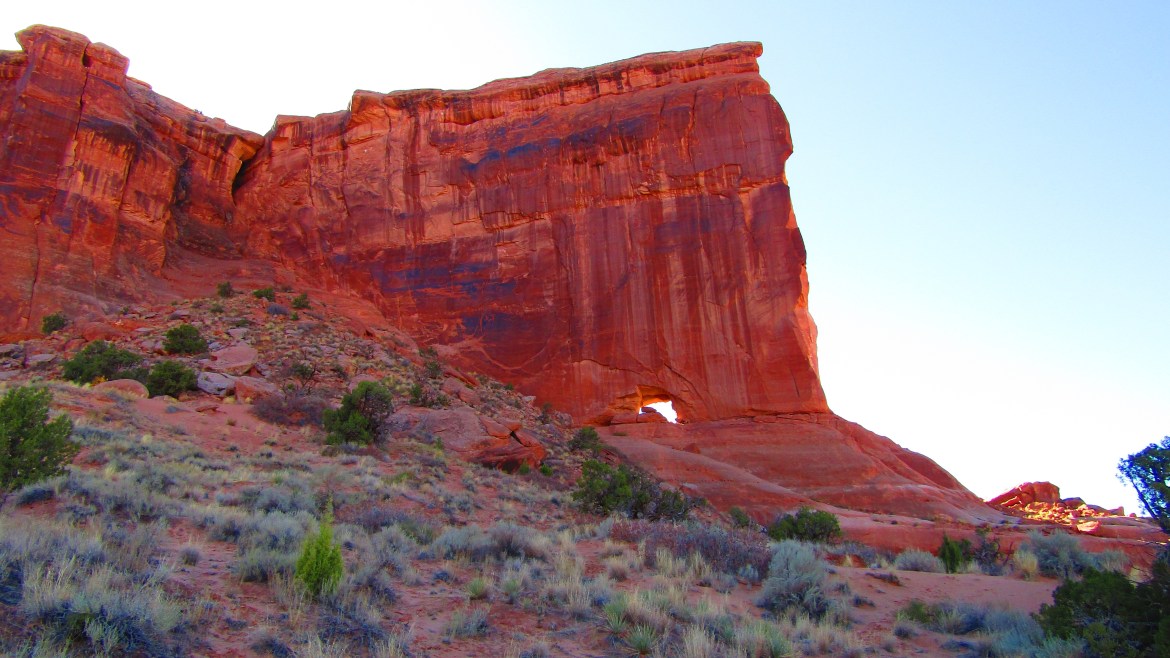 That’s the arch. I named it after myself. And no, I don’t care whether it has a real name. It was so difficult to get to because walking on sand up a steep hill isn’t easy. Who knew?! I had to stop to catch my breath a few times because of the elevation, heat, and general physical exertion.

And here’s a bit of extra information: I saw a green and blue spider the size of two quarters in a web between two little bushes. I actually almost walked into it. With that said I’m happy I didn’t die three days ago.

But I got to the Arch. And I felt so much like Indiana Jones that I decided to stash something around that Arch for my brother. An artifact of sorts, if you will. It was fun, and it’s still there, as far as I know.

Here was my reward. 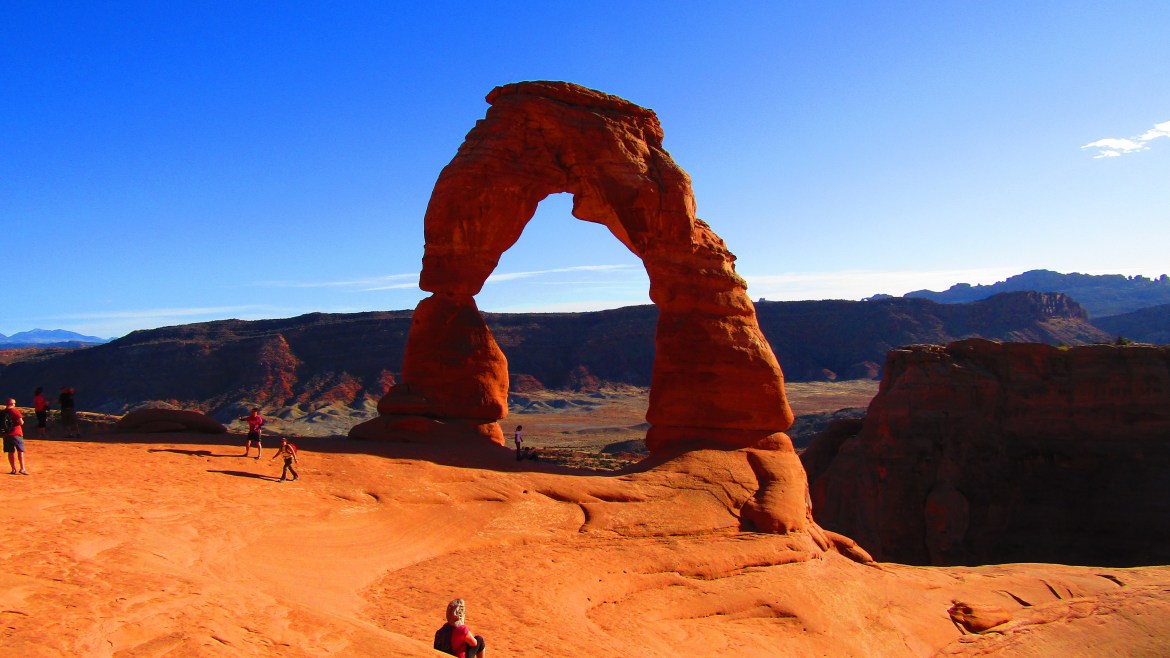 Now, for quite possibly my favorite part of this return trip, I went to a place called Double Arch. Here are my pictures. 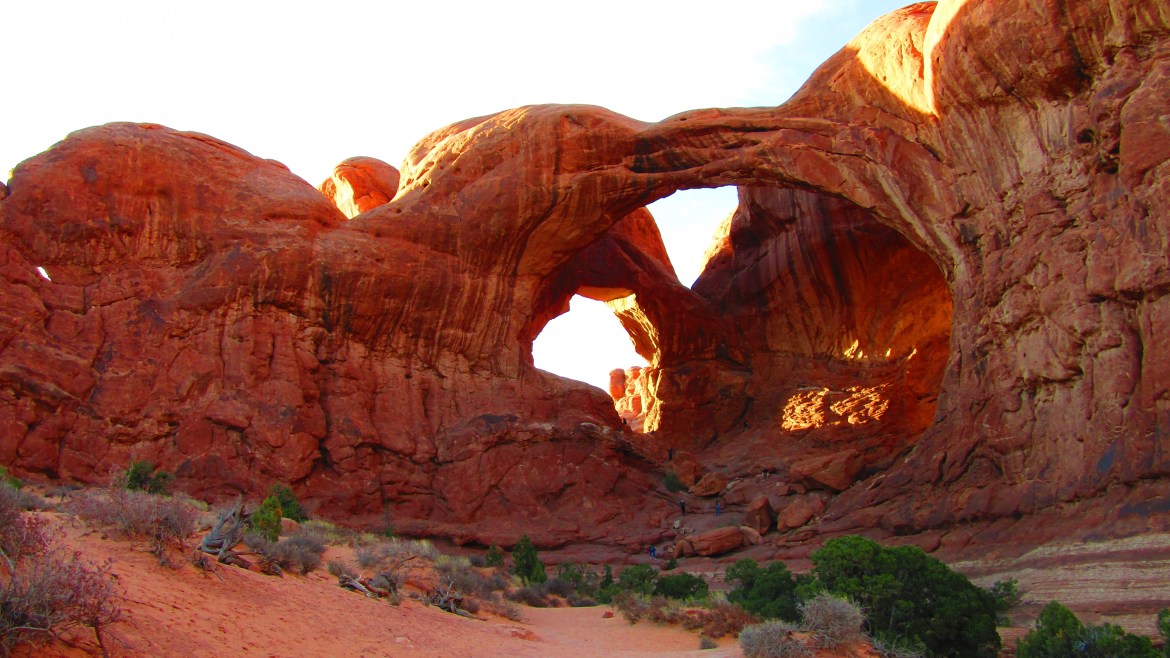 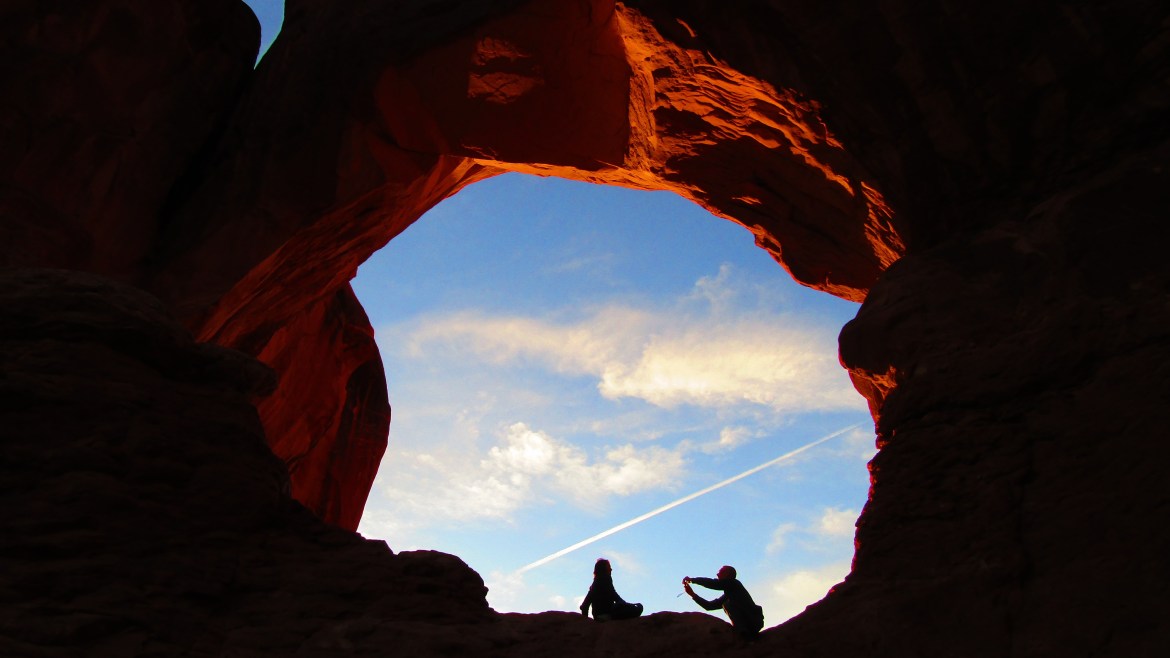 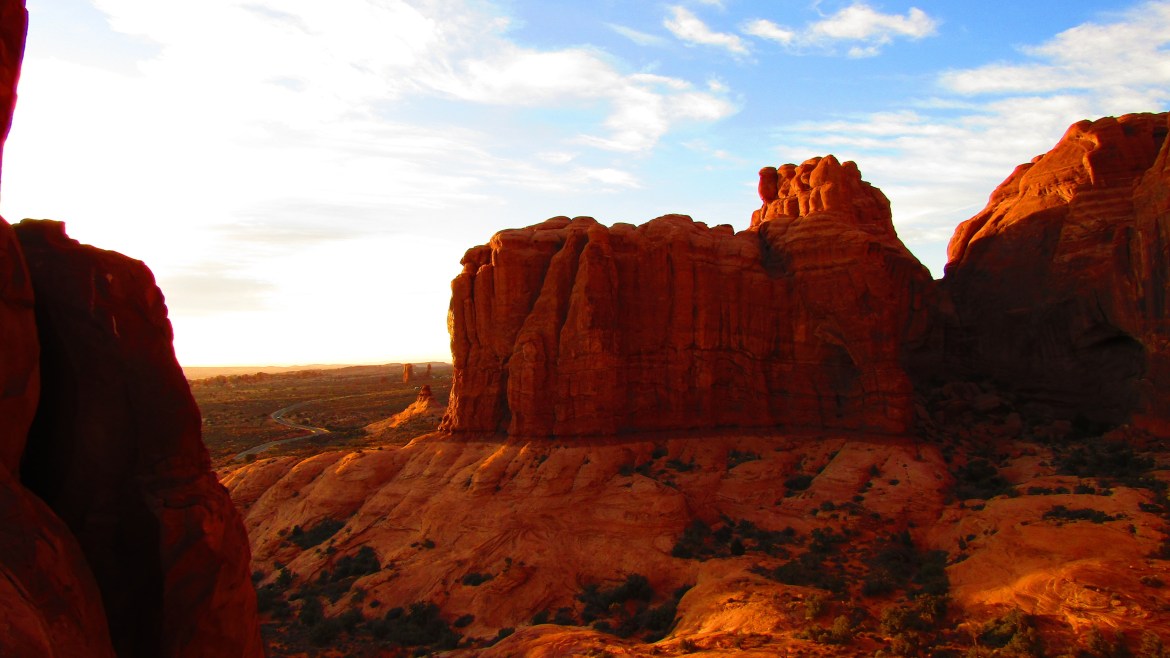 But I got there at the perfect time because the sun was setting, and as far as I’m concerned there’s no better place to watch the sunset in Utah than when you’re sitting inside double arch, staring out across the park. 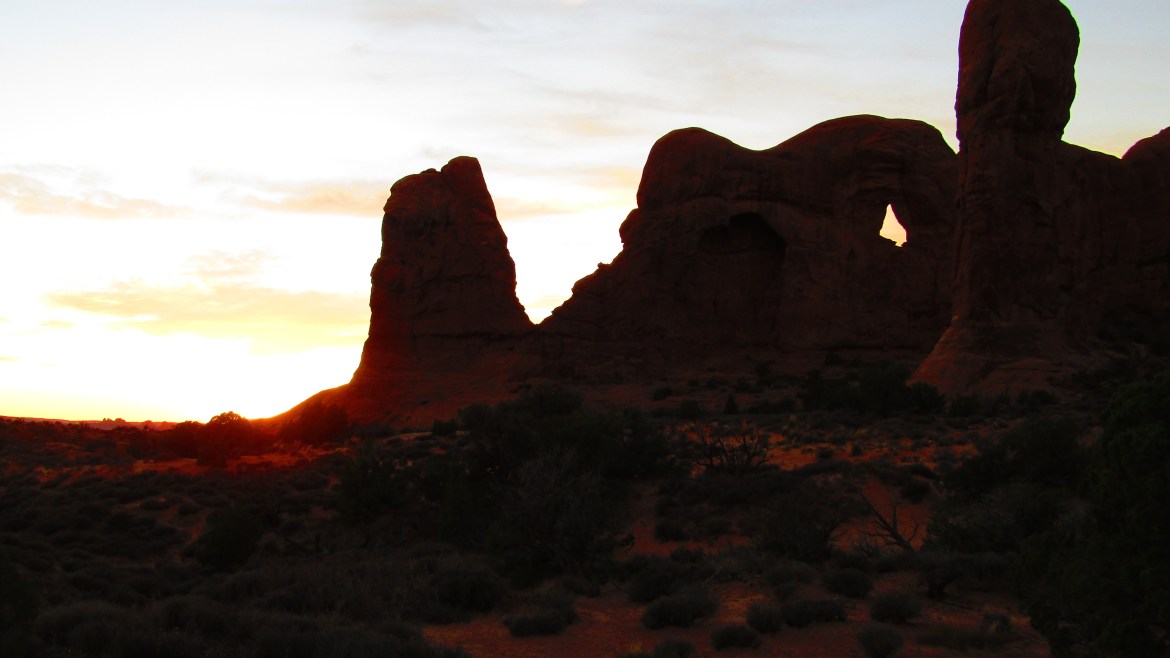 Arches is for adventure. It’s for feeling like you’re in a movie, or another world, or simply out in the middle of nowhere–because you are.

It turned out to be my favorite National Park, and I’ve been to Yosemite, Glacier, and Yellowstone. There’s just something about this place that speaks to my soul, what can I say? Glacier may be more beautiful, Yosemite might have more to do, and Yellowstone may have great wildlife, but I came here for adventure, and Arches has more adventure per square mile than any of the others.